If you enjoyed fairy tales as a child, you might want to learn how to write one yourself. Children of all ages love them, and fairy tales for adults, including modern takes on old classics, have become increasingly popular. No matter who your audience might be, these stories share many elements in common, and you'll need some basic guidelines to write one. The creative part - making the story all your own - is up to you.

Of all the elements that will make your tale come to life, your characters are the most important. You might want to start with ideas for characters as the foundation for building your story. Strive to create larger-than-life characters that will resonate with your readers. Keep in mind, too, that the battle between good and evil is a vital component of any successful fairy tale, and you want good to win out.

Your Hero or Heroine

First, you need to come up with the protagonist of your story, which will be a hero or a heroine. Whether a princess doomed to sleep for one hundred years like Sleeping Beauty or a boy no larger than his father's thumb like Tom Thumb, your main character needs to be sympathetic, someone your readers will want to root for. You could have a hero and a heroine, as with Hansel and Gretel, two children abandoned in the woods who are kidnapped by an evil witch who wants to cook and eat them.

Brainstorm possibilities, then see where they lead. For example:

Next, you'll need an antagonist, better known as a villain. The purpose of the villain is to cause a great deal of trouble for your hero or heroine, whether bodily harm, the disruption of a quest, or taking away someone or something your main character treasures. Villains can be like the big, bad wolf who wants to eat Little Red Riding Hood, the evil stepmother who neglects and persecutes poor Cinderella, or the witch who shuts the beautiful Rapunzel up alone in a tower in the middle of a vast forest.

You can develop your villain based on who your hero or heroine is. Consider:

Depending on the needs of your story, you'll probably want other characters to populate your tale, such as magical characters or secondary characters who either help or hinder your hero. For example:

You can choose from many kinds of characters for your heroes, heroines, villains, and secondary characters. No matter what role they play in your story, you have a lot of latitude in creating characters for a magical tale. Feel free to let your imagination run wild!

Give Characters Obstacles to Overcome

To make a good story, your main character must overcome challenges and obstacles. You might even want to develop your tale by brainstorming possibilities for obstacles. There's no one right way to start a story. It's all up to you. Your ideas for obstacles could suggest characters for your story, including your hero or heroine, your villain, and your magical and secondary characters. Furthermore, obstacles can be creatively combined to create a veritable gauntlet for your hero or heroine to run.

Your hero or heroine must travel to a particular destination in order to accomplish an important goal, whether saving a sick, dying, or captive prince or princess, defeating an evil overlord who is bent on destroying the world, or recovering an important magical object that is vital in ensuring that good will prevail. You could combine your heroine's quest with a coming-of-age element, through which she discovers her unique destiny.

The obstacle in your story doesn't need to be external. Instead, it can be a worrisome character trait in your hero or heroine. Examples include King Midas, whose greed leads to a golden touch that causes his food to turn to gold and become inedible, and Pinocchio, the wooden puppet boy whose habit of lying threatens his dreams to become a flesh-and-blood boy. Perhaps the hero of your story always wants to eat too much, or maybe he's extremely gullible and believes everything people tell him, no matter how ludicrous.

In fairy tales, magic can be used for good or ill. Plenty of stories make use of magical elements that work against the hero or heroine, creating a formidable obstacle to overcome. For instance, Sleeping Beauty is cursed by an evil fairy which leads to her falling asleep for one hundred years. Perhaps you could write a story about a hero who has been placed under a curse that makes him talk all the time, even when he's trying to sleep.

True love is often the goal, but the path to love is strewn with thorns, curses, illnesses, difficult journeys, strange enchantments, or malevolent villains who stand in the way of the heroine's "happily ever after." For example, Thumbelina, a tiny young woman, must fend off the unwelcome attentions of moles and toads in order to meet and marry a flower prince, who is just the right size for her. You could write about star-crossed lovers who live in alternate worlds and can only communicate through dreams.

Another vital component to a fairy tale is magic or enchantment of some sort. Every single element of your tale can be spiced up with magic, whether your characters, your setting, or the various obstacles your characters must face. You can even use ideas for magical elements as a beginning point for building your story. Remember that magic can work for your characters, against them, or both for and against them.

There are no rules about the level of magic you need. Go with what's best for your particular tale. The magical element can be the crux of the story, as with Jack and the Beanstalk where you have a magical beanstalk that leads to a castle in the sky, or the magic can be woven into the background, as with Goldilocks and the Three Bears where you have talking animals who live like humans in a house, but no other overt magic.

Sometimes the worlds in which stories take place are magical, as with Hansel and Gretel who, after being exiled to the woods by their evil stepmother, come upon a house built out of cake and candy by an evil witch. Another example of a magical world is The Girl in the Well, in which a girl discovers an entirely different world at the bottom of a well. With her kindness and her helpful nature toward the people in this strange world, the girl earns a great fortune for herself.

Pay Attention to the Setting

Setting is crucial to a good fairy tale. It sets the scene and when properly rendered, it enhances the otherworldly feel that's so important to stories of this genre. Your choice of setting will strongly affect both the mood and theme of your story.

Forests are one of the most common settings for magical stories since they represent the unknown. The forest can be a refuge for your characters, but it can also be a place where scary things happen. A forest can symbolize magic, mystery, or danger, and sometimes all of these at once, as in the story of Hansel and Gretel. You can change the feel of your forest from sunny and cheerful to dark and gloomy, or vice versa, to shift the mood of your story at appropriate points. 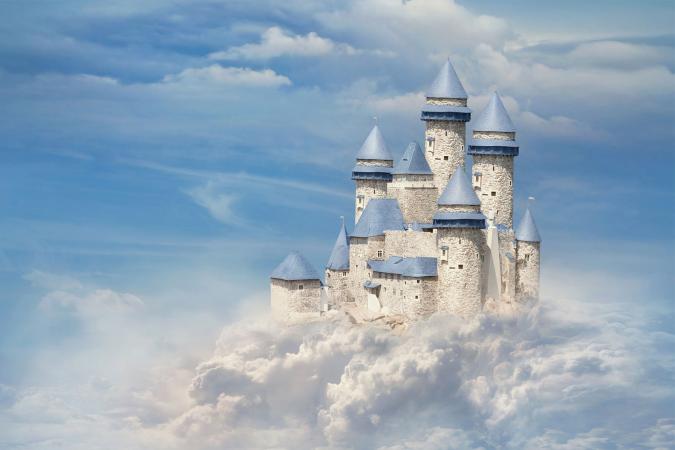 Like forests, castles can symbolize many things. They symbolize the heart of the kingdom and the domain of the king and the queen, its rulers. Castles are also linked with nobility, wealth, and power. Since a castle is a large, strong structure, it can serve as a place of refuge and protection against the dangerous elements of the outside world. Castles can also be thought of as places that harbor secrets, sometimes dangerous secrets, as in the tale of Bluebeard. Sometimes castles serve as prisons, as in the tale of Rapunzel.

While classic settings like forests and castles are mainstays of fairy tales, you can take pretty much any setting and make it work if you mix it with a healthy dose of enchantment. Goldilocks and the Three Bears takes place in a cozy house while The Little Mermaid takes place in the sea. The hero of Peter Pan spends a lot of time flying in the sky while the hero of The Ugly Duckling lives in a barnyard. Towns and villages can work, too, as in The Town Musicians of Bremen.

Consider just about any setting, either natural or man-made, and you can probably use it as the basis for a magical story. Ideas might include:

Teach a Moral or a Lesson

One of the most enduring characteristics of fairy tales is that they teach an important moral or lesson. When you're writing your own tale, you'll want to consider the message you want to impart by means of its characters and plot. Sometimes the moral of a tale is obvious, though it can be more subtle. Either way, it's the emphasis on heroic virtue that has given these stories their incredible staying power for countless generations of readers.

Give Readers a Happy Ending

A happy ending is mandatory. Even though we don't always get what we wish for in real life, a fairy tale inspires us to believe that anything is possible. The ending to your story must be believable in the context of your characters and plot and optimistic in a way that satisfies your reader. The hero must always win over the villain, true love must always triumph, and the ugly duckling always turns into a beautiful swan. In your tale, 'happily ever after' should be just a song, a smile, or a kiss away.

Do What Works for You

While there are elements to a fairy tale that are necessary to the form, you should feel free to experiment with writing your story in whatever way works best. You can begin with ideas for characters and go from there. Alternatively, you could start with an obstacle, a setting, or a magical component and see what develops. Allow one element flow on to the next. Engaging and enduring stories aren't built by formula or committee. They're built organically, using both your mind and your heart.

1
Comments
© 2006-2020 LoveToKnow, Corp., except where otherwise noted. All Rights Reserved.
Resources, Advice & Tips for Covid-19
Read More
How to Write a Fairy Tale